What is Adhoc Testing? 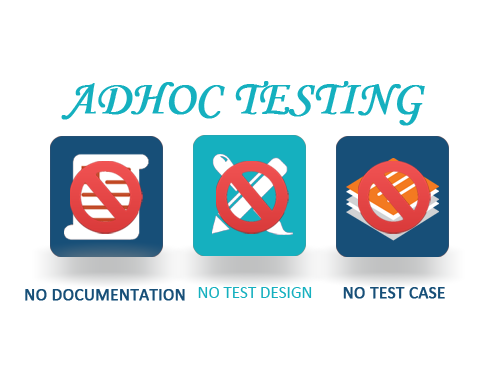 Adhoc Testing is an informal way of testing, which is done randomly without any plan & strategies, with the intent to break in to the system/software. Usually, it does not involve any test strategies, documentation & plan. Mostly, "error guessing technique" is favoured by the testers having good knowledge of the system under the test.

Tester must have in-depth knowledge of the system to make accurate guesses. Here, skills of a tester work as a tool for carrying out the testing. It is better to perform this type of testing, only after the execution of formal testing, depending upon the time available thereafter.

Ad-hoc Testing is an important testing technique, wherein testers think from the perspective of the users and perform testing beyond the test plan boundaries. This may results into invention of undefined sets of scenarios and cases which may not be included in the "test strategy".

To help testers identify and find defects accurately, ad-hoc testing involves various kind of tests, which are described in detail below:

- As the name suggests, in this type of testing there are two members, a tester and a developer, chosen to work on the same module. This allows the features to be viewed in a broader scope by both parties. The developer gains a perspective of all tests run by the tester and the tester too gets an insight of the inherent design, which helps them avoid designing invalid scenarios as well as prevents defects. - Similar to Buddy testing, two testers work together on a module with the same test setup shared between them. The idea behind this testing is to have the two testers brainstorm ideas and methods to detect more defects and to get best results. Get more information on "pair testing" here. - This testing is mainly performed at the unit testing level. Mostly this technique is done automatically where the tester tests the application by providing completely random inputs to ensure that the system is able to withstand any crashes as well as to check its behaviour. Get complete information on "monkey testing": here.

From helping the testing team perform thorough testing to ensuring the effectiveness and quality of the product, ad-hoc testing is an integral part of "software testing life cycle (STLC)". Other advantages offered by ad-hoc testing are:

Even though there are several advantages of Ad-hoc Testing, one cannot ignore its few drawbacks.

The process of ad-hoc testing can be made even more effective by adopting the following steps:

Adhoc testing is an informal type of testing that consist of various advantages that benefit the tester and allows him to detect inconsistencies and get the best test results in limited period of time. This is one testing technique that guarantees to cater to and satisfy a tester’s creativity to the maximum. There is no limit to being innovative and the tester ends up getting more information as well as knowledgeable. Also, Ad-hoc Testing saves ample of time as it does not require elaborate test planning, documentation and test case design. Hence, through Ad-hoc Testing, one can check for the completeness of testing and find more defect than planned testing.