In the field of the software engineering, it's a very well-known fact that the testing performed at early stages of the software development life-cycle has always proven to be a time and cost saving solution. Early identification and detection saves efforts and time to fix bugs and issues, which may got complicated and difficult to correct at later stages. Smoke Testing and Sanity Testing are few of the important testing types which ensure the detection of bugs and defects in the early stages of the development cycle. Let's have a small overview of Smoke Testing vs Sanity Testing methodologies.

What is Meant by Smoke Testing?

"Smoke Testing" is a type of preliminary testing performed over initial build or 1st/first build of a software product under development which may be either stable or unstable. Through smoke tests, stability of a newly developed software build(s) is assessed to make a decision over further execution of thorough and rigorous testing activities on these builds. On passing the smoke tests, build is subjected to more strict and strenuous testing methodologies such as functional testing and system testing, else it is considered unstable to face off further high levels of testing and is rejected & restricted for further testing.

This testing technique helps in saving precious time and valuable efforts of testers to work on relatively unstable or incomplete build which may eventually breaks down at the later & complex stages of testing.

What does Sanity Testing Mean?

Unlike smoke testing, sanity tests are executed on the relatively stable build(s) undergone through multiple regression tests to ensure that all the previously found bugs got fixed and no further issues or complications prevails or occurs in the existing functionalities after the process of bug-fixation through code modification.

Outcomes of sanity testing are similar to that of smoke testing i.e. if build passes the sanity test, it would be considered stable and capable to face-off further rigorous testing activities otherwise will be thrown in the rejected list of builds.

What is the Difference Between Sanity and Smoke Testing?

Meaning and objectives of these two testing types are much different to each other but still most of us remains in the state of ambiguities over the differences between Smoke testing and Sanity testing. Here, we are listing out some of the notable key points of difference between sanity testing and smoke testing to have crystal clear understanding of these two different testing methodologies. 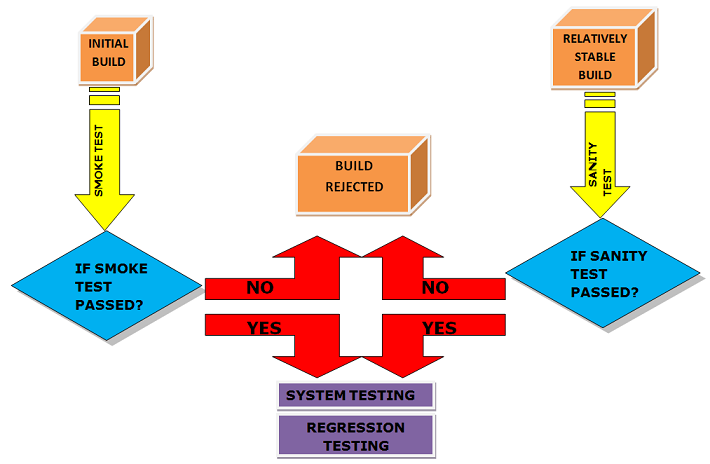