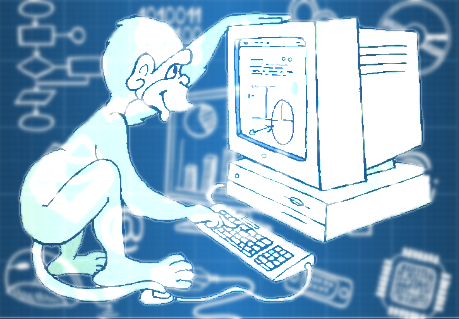 Testing, which is a crucial part of Software Development Life Cycle (SDLC), helps software engineers in determining the quality, performance, reliability, effectiveness, and security of the product, both before and after its release. Moreover, testing is the best way of finding bugs and defects in the software as well as to resolve them as soon as they are detected by the team of testers. Monkey Testing/Random Testing, is a type of software testing, which was mentioned for the first time in the book The Art of Software Testing by Glenford J. Myers in 1979.

This technique of software testing is extremely popular among software engineers and is used by them to test applications by providing random inputs and checking its behaviour.

A software testing technique, where the user tests the application by providing random inputs, is known as Monkey Testing or Random Testing. It is a functional black box testing, which is performed when there is not enough time to write and execute the tests. Monkey testing, which is technically known as stochastic testing, can be performed for desktop, web and mobile applications and it is usually implemented as random, automated unit tests. This type of testing gives us an advantage of easily estimating software reliability from test outcomes.

This form of testing, the test inputs are randomly generated according to an operational profile and failure times are recorded. The data that is generated or obtained from random testing can then be further used to estimate products reliability. Other testing methods cannot be used in this way to estimate software reliability.

Use of inputs of random testing / monkey testing can save some of the time and effort that more thoughtful test input methods require. Mostly performed automatically, in monkey testing the user enters any random invalid input and checks its behaviour. Moreover, it does not follow any predefined test cases or strategy and hence works on tester’s mood and gut feeling. Monkey Testing / Random testing works very well when doing load and stress testing.

The term monkey testing comes from the idea that if someone had a million monkeys typing on a million keyboards for a million years, statistically, they might write a Shakespeare play, or some other great work. All the random pounding of the keys could accidently hit the right combinations of letters and the monkeys would for a moment, look brilliant.

Following this theory, Monkey Testing usually involves testing the software or application by providing random data and observing if the system crashes or not. Monkey testing is an automated test that is conducted without any specific test in mind. The main objective of this type of testing is to crash the system by providing random inputs and to ensure that it does not crashes once the product is developed completely. Other characteristics of monkey testing/ random testing are:

At the end the team of testers try to replicate the issue, once the defects are retested and fixed. The process of monkey testing/random testing can be categorised into three types, each of which is focused on different aspects of the software and play different role in finding various bugs and discrepancies. These types of monkey testing are:

Advantages and Disadvantages of Monkey Testing

Monkey testing cater to a vast array of testing needs of an organisation and make the process of testing easy as well as cost effective. It is a software testing technique that tests scenarios which are generally random and ad-hoc. Apart from providing several advantages to the users and testers, monkey testing has several disadvantages, which can at time overpower its positive qualities. Therefore, here are some of the advantages as well as the disadvantages of monkey testing:

Is Monkey Testing same as Gorilla Testing and Fuzz Testing?

Monkey Testing is very ad-hoc in nature and many a times confused with Gorilla Testing which is pre-planned and strategized. Further, it is also being compared with the fuzz testing but both of them are very much different to each other, as fuzz testing concerns with the randomly selected data input, whereas monkey testing deals with the random actions to carry out the testing.

It is pertinent to mention that some of the people finds monkey and adhoc testing as the same testing technique, which is inappropriate to say as ad-hoc testing is carried out without any planning or documentation work and its purpose is to divide the system into subparts in order to evaluate functionality which is opposite to the working of monkey testing.

Hence, it should be clearly remembered that the Monkey testing is very much different from other types of testing techniques that serve different purposes. Choose the correct test as per your requirement.

Monkey Testing/Random Testing is a type of software testing, which is comparatively new as well as popular among software testers. It is a testing technique, where the users provide random inputs and then execute testing to check its behaviour as well as to know whether the system or application crashes or not. Moreover, it is an automated test that is conducted by the team of testers without any specific test in mind.

The main objective of the team during monkey testing is to crash the system and to prevent it from happening in the future under any circumstances. Monkey testing, which is also known as random testing, is the easiest way of testing the quality, functionality, as well as the performance of the software.