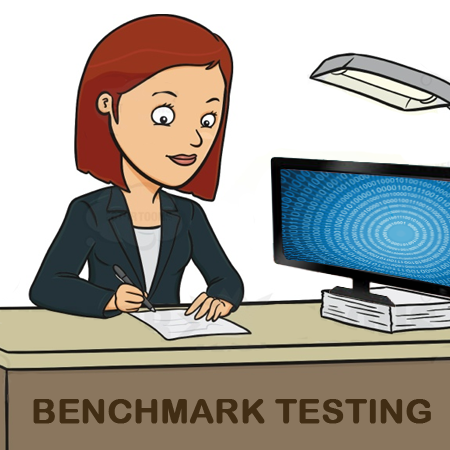 To understand the significance of benchmark testing in SDLC, let us indulge into a detailed discussion on the same.

Benchmark, as defined by Merriam-Webster dictionary means, “something that serves as a standard by which others may be measured or judged”. To put it simply, it is a metric or a point of reference against which products or services can be compared, which further assess the quality of the said product or service. Similarly, benchmark testing is the process of load testing a component or an entire end to end IT system to determine the performance characteristics of the application. It is mainly used to compare the performance of the software or hardware, which is also known as software under test (SUT). Additionally, benchmark testing can combine the aspects of security testing.

A part of the Software Development Life Cycle (SDLC), benchmark testing involves both developers and database administrators (DBAs) to determine current performance of a software and makes changes to improve the performance of the same.

The aforementioned points signify the importance of benchmark testing in Software Development Life Cycle (SDLC). It is one form of software testing technique that helps team of adept and dexterous testers in various innumerable ways. Benchmarking is helpful in understanding how the database manager responds under varying conditions. With the assistance of benchmark testing one can create scenarios that test deadlock handling, utility performance, different methods of coding data, transaction rate characteristics as more users are added and even the effect on the application of using new release of the product. Moreover, benchmark testing is the company wide standard for the performance testing metrics, which every software application that belongs to such an organization should pass. The other characteristics of this type of software testing are as follows:

The goals and objectives of this type of testing are numerous, some of which are mentioned below:

Benchmark testing is not a term related to just software testing, but it also deals with hardware testing and is considered as one of the most important tasks in the business world. Its requirement and popularity in the software industry is increasing day by day, as it provides numerous advantages to its users. Moreover, it is a type of testing that can easily be performed using the same software and hardware that will run in the production network. The requirement of this type of testing is not limited to one section of the software industry and it can be performed to fulfil various services. Therefore, the services for which this testing can be done are:

TPerformed using the same software and hardware that runs in the production network, benchmark testing helps testers and developers in identifying any snags or errors that may occur after the product is released. The hallmark of this type of testing is the repeatability of the test suites. Therefore, to help you get a better understanding of this type of testing, here are the components of benchmark testing:

As stated above, benchmark testing offers numerous benefits to developers and testers, as well as the users. With the assistance of this testing technique, the team of testers can effortlessly ensure the quality, performance, efficiency of the end product. Other advantages of benchmark testing are: Helps measure how a change or modification affects the performance characteristics of a software product.

As stated before, benchmark testing is an integral part of Software Development Life Cycle (SDLC), which is mainly used to compare the performance of software or hardware system. It is a type of software testing that gives repeatable set of quantifiable results from which present as well as the future software releases for specific functionality can be baselined or compared. In short, benchmark testing is the one stop solution for software developers and testers who want to develop a quality product that offers remarkable services.