"Triage" is actually a French medical term, derived from the verb trier, meaning sort or select. It's concept is very interestingly applied to software quality assurance. The term is used in the context of determining the priority of patient's treatment based on the severity of their condition. The severity status of a patient can be classified as the following- those whose death can't be avoided by any kind of treatment, those who will recover even if not attended and those who will recover only if aided. Similarly the term is used in software quality assurance to assess and prioritize new defects.

Now let us dive deeper into the subject. Once the testing phase is reached , the reporting of bugs begin. The next thing is to organise a big triage meeting which should comprise of a Quality Assurance Lead, Development lead and Project Manager.The main focus of this meeting is to fix the most critical bugs, thus a well prepare report is prepared for the team, prior the triage meet.By the end of this meet , effective planning should be formulated to deal with the defects noted down during the meeting. The two main criteria which forms the basis for finding effective solution to defects , can be classified as :

Priority is assigned to a defect according to the degree of risk involved in it. Priorities are marked as - critical, high, medium , low.

Severity is the seriousness or degree of criticality of a defect. 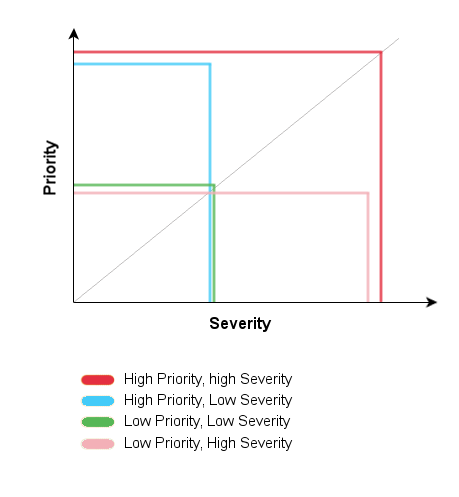 The defect triage system has a certain flow.

The bug triage team sits together and prepares a plan. They review the defects in the light of the available resources to fix the bugs. Defects are analysed and assessed on the basis of the degree of their severity. Finally a consensus is reached after a step by step analysis of the defects , and it is decided whether the defect is to be monitored or can be removed from list.

The bug detection is a very important step in the software testing phase. It enables the developers to analyse the errors and find an appropriate solution to it. Hence the bug/defect triage is gaining momentum in software quality assurance.