What is a Bug Life Cycle?

A bug life cycle traces the status of a bug from the time it is first found out till its eventual elimination by the testers. During this life cycle, it has to be ensured by the testing team that there should be no chance of bug being reproduced again.

With the flow diagram as a reference, here’s a brief status-wise description of the bug life cycle. 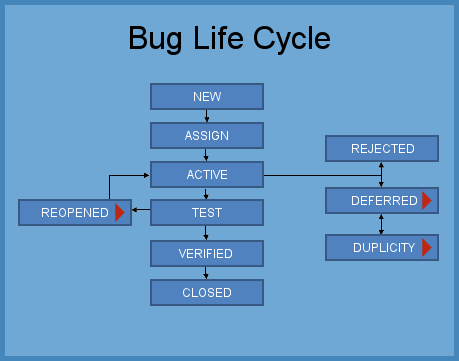 An integral part of the bug life cycle, a bug report is a document prepared during the process of testing that offers all the necessary information regarding the various defects, errors, bugs, and other discrepancies found in the software product.

It is prepared by the testing team to keep the developers informed about the status, priority, and severity of the defects, as well as to ensure that they are fixed and resolved, before the release of the product. This report follows a standard format to deliver accurate and concise information, which includes the following details:

For the complete template/format of a Bug Report, click here.