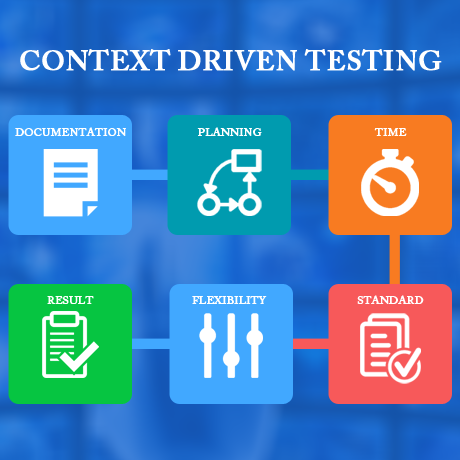 There are many varieties of software testing that are adopted by writers as well as consultants. Among those, context-driven testing is the domain that constitutes a responsible style of software testing among the intellectuals. This testing field advocates the continuous and innovative style of evaluation regarding testing opportunities.

These opportunities are based on the potential information that is revealed along with looking at the value of that information right away. This testing method also supports the way of testing which matches with the project contexts rather than just following the predetermined notions related to the best practices.

According to it, the context bearing human part of the perspective is the most decisive attribute, and effective testing is a mastery of skills not the courses of action.

The imperative factor which is the value of a particular project is highly dependent on the related context. One thing should be kept in mind, and there are only good practices exist in the case of the contexts of this testing, there are no best ones. The most vital part of a context of the project is teamwork that means all the people are working together for a sole purpose. Eventually, a project unfolds but most often not in a predictable way.

Here, a solution is nothing but the product, and if the approach is not about solving the problem, then the product will not work. Good quality context-driven software testing is not an easy work; it is rather a very challenging and intellectual practice. During the project, judgment and prowess are the keys and by exercising these together throughout a project, effective testing of the products can be done.

The most successful testers never want to get limited with adopting a few numbers of testing techniques that the agile methodologies, such as- Extreme Programming has recommended. This specific software testing is based on a particular set of values linked with the test methodology. It is not entirely a test technique itself.

A good context driven testing method is- the way of approaching all the testing situations like those are different from each other in different ways. A wide and profound awareness regarding the problems related to the projects and then developing proficiency to react towards a particular situation is the real talent of a successful context driven tester.