What is Fault Injection? 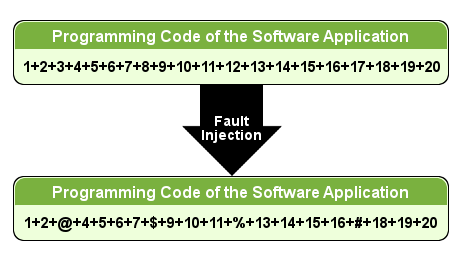 In the diagram, it may be seen, that the software programming code consists of the addition of the numbers, in the series. After applying the technique of fault injection, errors are being introduced in the programming code, by replacing a few of the number, with the different & unknown inputs.

It is a simple testing technique, which emphasizes on the robustness and stress feature of the software product. This type of testing ensures the 100% coverage of the programming/ source code under the test.

The evaluation of the source code, is carried out, and it may results into the identification of the bugs, which are subsequently, removed from the source code. This leads to gain in developer's or tester's confidence, towards achieving software's quality.

Perhaps, making source code 100% bug free, is a moment of joy, but it may not guarantee the coverage of the complete source code. It might be possible, that some of the codes are left unseen and untouched, which may contain potential bugs, and is sufficient to degrade the quality of the software product. This situation arises the need of fault injection technique, which ensures the 100% coverage of the code.

The task of fault injection in the software application may be performed, mainly through following two approaches.

This method involves the fault(s) introduction in the source code, by applying modifications in it, in order to generate desired fault in the software application.