What is meant by Gorilla Testing? 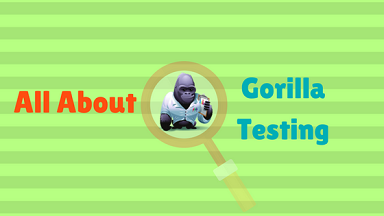 Each and every software has to go through many big and small tests before it can be released. Achieving the final product is a collusion of intensive work and extensive testing. One part of such exhaustive testing is known as Gorilla Testing.

Testing each portion or module of a software to its breaking Point is known as Gorilla Testing. In other words, every minor code of the software is tested until it starts to fall apart or fails to give the desired results. Often due to the brutal nature of this testing technique, it is also known as Torture Testing or Fault Tolerance Testing.

Each module of the final product is picked one at a time and tested with a range of valid and invalid inputs. These inputs are not always pre-determined, in fact, they are random in nature. They are used until such a time that the results break the acceptable tolerance level. Simply speaking, in Gorilla Testing repetitive manual testing is done progressively to test the robustness and capability of the software application. The idea behind Gorilla Testing is to satisfy even the most erratic software user.

To get a better understanding of gorilla testing, it is necessary for us to point out its features, which will help us differentiate it from other types of software testing techniques. Therefore, here are some of the features of gorilla testing:

Performed manually by testers & some developers.

Gorilla Testing is performed during the last stages of the Software Release Life Cycle to positively conclude that all facets of the product are working within the expected range. To this end, the advantages that Gorilla Testing creates for any software are:

Too much testing makes for its own set of disadvantages. The most obvious disadvantages of Gorilla Testing are:

Due to the similarities between gorilla & monkey testing, they are usually considered the same by numerous people all over the globe. These, though use random valid & invalid inputs, the purpose of their testing is different from each other in various aspects. To elaborate these differences, provided here is a comparison of gorilla testing & monkey testing.

It is always wise to know how far a software can be stretched before it gives way under pressure. Gorilla Testing accommodates this need of the developers by providing an insight into its breaking point. This gives a chance to the developers to tighten the loopholes in case they are unacceptable. Ultimately, Gorilla Testing is a play of strength.

You may also like our next article on monkey testing.