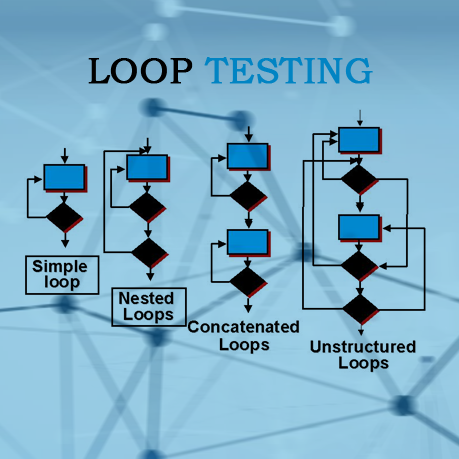 Testing a software time and again before release ensures its functionality and reliability. This way it is possible to make sure that it does not gain any negative feedback from the word "GO". As testing moves forwards through various stages, one of the test's that is conducted on it is known as a Loop Test.

What Is A Loop?

In order to understand Loop Testing, one needs to understand what a loop means. To that effect, a loop is a structure or a series or a process, the end of which is connected to its beginning. In terms of computer programming, it is a sequence of instructions that is incessantly repeated until and unless a fixed condition is reached.

What is a Loop Testing?

Loop testing comes under white box testing. Each and every software is formed of numerous algorithms. Loop Testing concentrates on checking the loop validity of these algorithms. The aim of this kind of testing is to expose the bugs that might be present in any given loop.

Like every other testing procedure, Loop Testing is also extremely critical. Its main advantages are:

So far, the only significant disadvantage of Loop Testing is that it takes some time to identify each type of loop and test it accordingly. There are four different types of loops namely –

Since all these types of loops have to undergo different types of tests, they cannot be tested in the same manner. And hence, it becomes excessively important to identify each type correctly. Any mistake in identifying them will reflect in the form of a software that has performance or functionality issues.

Testing of any kind cannot be taken in a playful manner. When it comes to Loop Testing, one must remember how critical it is towards making a software run smoothly. Due diligence and competence while running this test will make the software that much more fit and proficient.