"Bug that occur once in the lifetime of an application"

A 'non-reproducible bug' is one such bug that occurs at a certain point of time or is triggered by a particular action, which are not easy to trace or recreate or reproduce by the testers. Such bugs are hard to replicate later on can become a challenge for a tester to deal with.

The term is a bit tricky in its approach. How can a bug be "non-reproducible" or what is the logic that underlies this phrase? Few points are worth noting in this regard, as to what causes the need to term a bug as 'non-reproducible'.

Hence 'non-reproducible' states that a bug may change as per a change in the test or work environment and therefore may not necessarily be reproduced. 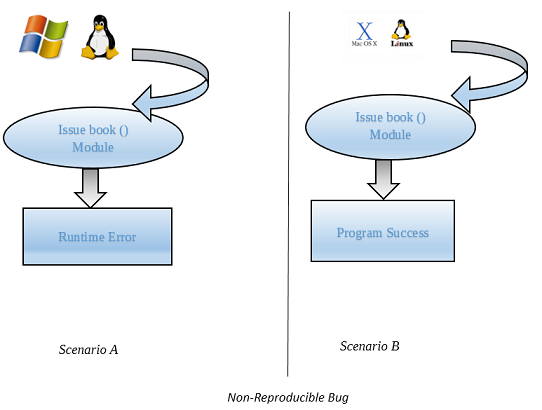 With the above pictorial depiction we try to portray the distinction between execution of a single module on different operating systems. Say we try to implement the module in a version of Linux say ‘Red Hat’ which might produce a bug whereas another version of Linux may not reflect any bug at all. The similar scenario goes with other operating systems as well, portraying a picture of 'non-reproducible bug'.

Let us do a quick in depth analysis of the concept.

Sometimes testers are challenged to find bugs that are "hard to find". Repeating same steps or procedure to carry out debugging may not always bring out the same bugs. It is important to figure out ways which helps to generate the most appropriate results.

Here is a list which depicts the key points to be considered when writing test cases to reproduce bugs.

Among many other factors, a major factor in finding bugs is to develop a keen observation for it. Information regarding the hardware and software on which the test runs, must also be maintained.

Any third party application, operating system that are being used, must be noted carefully.In case of bug report by an end-user or client, it becomes an important factor to collect the history of bug report from the client, immediately.

Such details are important for the tester, in order to reproduce bugs.

Often a situation arises that following a certain strategy to find a bug may not necessarily reveal a bug. In such a scenario, a closer look at the previous bug reports help us to identify a definite pattern of bug occurrence.

For instance, a bug may occur at the time of registration on the website, say, the submit button is not working.

A pinch of innovation is what it takes to break the monotony. A tester must possess such creative skills to be able to lead the league.

Although it is never possible to eliminate each defect, bug correction activity continues even after release of a software product.

A 'non-reproducible bug' is a challenge which a tester must accept gracefully and apply the right perspective with much attention to details.