What is Spike Testing?

Software Performance Testing at a Glance: 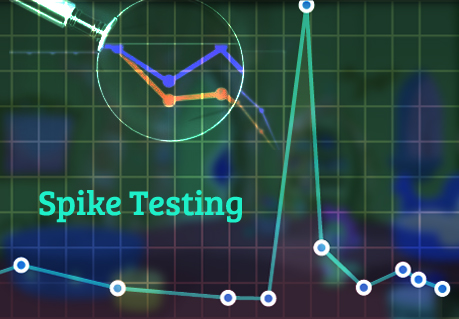 Testing the performance of a software is a necessary activity that verifies various crucial components of the software, such as its speed, stability, and scalability. It is a vital part of Software Testing Life Cycle (SDLC) that involves several testing techniques like load testing, endurance testing, volume testing, stress testing, spike testing, and more. All these testing techniques ensure that the software works well under expected workload and conditions, and delivers expected results. Hence, with the assistance of performance testing software testers are able to provide the stakeholders all the necessary information regarding the speed, stability, and scalability of the project.

What is Spike Testing?

As mentioned above, spike testing is a type of performance testing, which is executed mainly to validate the performance characteristics of the software under test (SUT) when it is subjected to workload models and load volumes that increase repeatedly beyond beyond anticipated production operations for a short period of time. Spike testing, which is also a subset of stress testing, tests software’s reaction to a sudden spike in the load generated by users.

The main objective of this type of software testing is to ensure that software performs accurately without any failures when there are an unexpected increase and decrease in user load. In short, spike testing tests the software system under extreme load conditions to make sure no issue related to the software’s speed, scalability, and stability is encountered by the end user after the delivery of the product.

The main purpose of Spike Testing is to access:

Spike testing is crucial and is mainly done to test how a system reacts when there is an unexpected change in user load. Performed in a controlled environment during the process of software development, the process of spike testing requires constant monitoring as it estimates the weakness of the application and checks its dramatic behavior when there are a sudden increment and decrement of in the load of the user. Hence, the goal of this process is to reach or go beyond the maximum capacity of the software to ensure optimum user experience. The process of spike testing is:

The various advantages of Spike Testing are: