What is System Reliability Analysis

Analysis is an important activity along with other testing activities. We have come across the term data analysis. The idea behind data analysis is to ascertain the time to failure of a particular component or system.

In system reliability analysis, we create a complete system model by integrating the various sub modules. So basically, this analysis technique aims to represent times to failure of the complete system on the basis of distribution of components or assemblies, of which it is composed. After gathering complete information about the object of analysis, the analyst identifies a point where no more information is required. The identification of this object determines the next point of analysis.

Now once the details about analysis are figured out, the next task is to identify the relationships among the different components, which helps to decide about the component's optimization and improvement and also to ensure system reliability and maintainability. 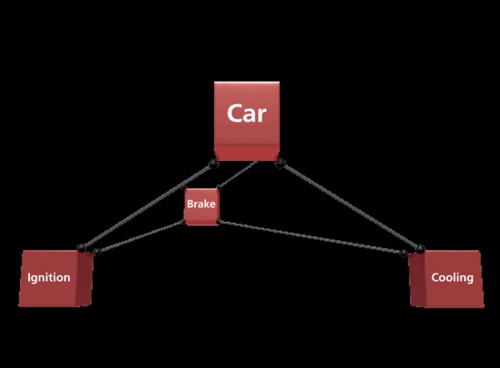 For instance, a car or any vehicle is composed of the aforementioned components. The representation of components in a diagram also depends on the level of detailing needed at our end.

As we can see, the ignition, brake, cooling are the subsystems that together form the complete system called the car. It is up to the analyst to choose what level of granularity is required for data analysis and that's how he breaks down a whole system into sub-systems, based on the availability of resources.

How to get component data?

After separating the different components, the next task is to get life/event data for each component, in order to evaluate the reliability of the system. This information can be gathered from various sources like - in-house reliability tests, accelerated life tests, engineering knowledge and similarity to prior designs.

The concept of dividing the blocks and defining the various properties like time to repair, throughput levels etc, helps to optimize a system. Reliability block diagram aims to determine the functioning of the components, that is, their success/failure.

Block diagrams are often termed as analytical or simulation diagrams.

The analytical approach to diagrams refers to the determination of a mathematical expression which explains the reliability of the system as a whole on the basis of reliability of its components. This diagram is useful when one intends to carry out reliability analysis of components.

These diagrams focus on repair and restoration actions. This is primarily concerned with the life of a system, that is, over a period of time a system's capability to perform is deteriorated. In this system, failure times are considered in accordance with the reliability of the system components.