Testing a software using some tool is test automation. The automation tool controls the flow of execution of tests, and also compares the actual results with the expected outcome. Test automation can simplify the task of running repetitive test cases in a very formalised manner and reduces the burden of manual testing to a certain extent.

Manual testing is sometimes prone to errors, because the testing is performed by humans. So essentially the idea/motive behind automation testing is to lessen the burden of manual hunting for errors. Automation tool can thus execute all the test cases required to test an application. 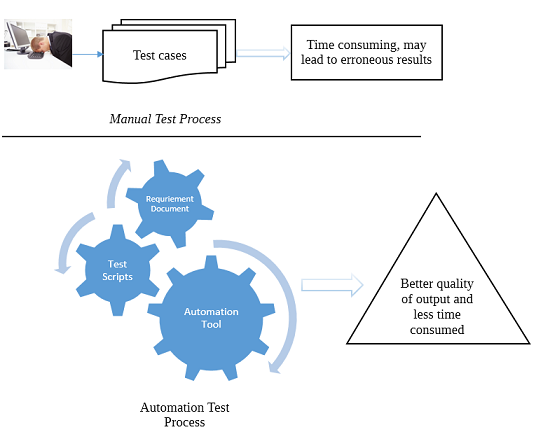 It is important to choose a tool that best serves the purpose we intend to solve. Therefore one needs to list the priorities according to which we may make a choice of an automation tool. Following are the list of criteria's one may consider while making automation tool selection.

Various approaches to automation testing exists, among those the following are generally used :

A tester must be proficient in a programming language in order to write test cases for a various test scenarios. Test automation can be prove to be a great advantage in case of performing regression testing.

Test automation makes testing simpler in many ways. A test framework defines the format in which the expected results are to be expressed, executing the tests and generate report. A wise selection of a test automation tool can have an impact on the analysis of a product's performance.