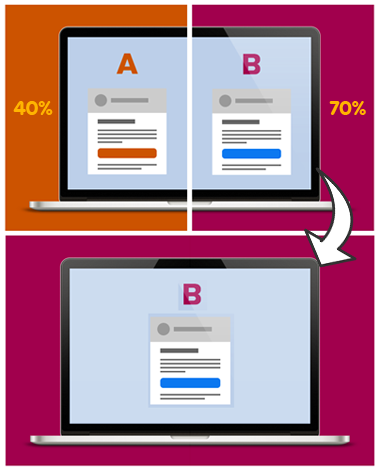 What Is A/B Testing?

Also known as Split Testing or Bucket Testing, A/B testing can be termed as a controlled experiment with two variants of a single variable. During the process of A/B testing, comparative analysis, of two variants of a web page or mobile app, is done to determine which one performs better. The data and statistics thus obtained are then used to justify the incorporation of new changes to the product, which increases its viewership on the internet or help achieve expansion of user base.

Though similar to multivariate test and multinomial test, this type of testing is only focused on testing two variables of a page, app, blog, campaign, etc. at a time.

Why Should You A/B Test

An A/B tested web page or a mobile app enables companies to make more out of the user traffic on the internet. This makes a world of difference and is seen in the form of enhanced generation of new leads and sales. Obviously this results in a significant rise in revenue and market shares of the company. Other reasons for considering A/B testing are:

How does A/B testing Work?

There are a number of elements in a webpage/app which affect it's user behaviour. Some of the prime ones are:

The web page or the app to be split tested is called as the control. One of the elements is chosen to create a modified version of the control called variation. Both the control and the variation are shown to two different halves of the usual web traffic.

The user experience with each version is measured and collected in an analytics engine for analysis through statistical tools like graphs and pie charts. It is then easy to determine what effect each version had in the form of positive, negative or a neutral feedback.

Apart from comparing two versions of the same variable, there are other important uses of A/B testing. The team of testers can run a test for A/B testing for the following reasons also:

How is AB Testing done?

The process of A/B testing involves various steps, which allow the team to effectively manage and optimize components and get real feedbacks that can improve the effectiveness of the product as well as convergence rate. These steps are:

This process can also be performed with the assistance of various A/B testing tools available in the market.

What Can You A/B Test?

By implementing the process of A/B testing, you can test virtually anything, from your product and its basic features to web pages, email campaigns, and more. However, the focus of this testing should not be on testing each and every component, but should be directed towards testing aspects and components that impact user behavior as well as the popularity of the product. Few of these components are:

Other than using the variants and Control, A/B testing can be used for testing more than two variants at a time. Let's say we want to test the main front image of a web site. We can run a single test and split the audience or the recipients into three groups. This alternative approach has been found to be more efficient and less time consuming as it saves us the trouble of running three separate tests namely, AvsB, BvsC and AvsC.

Things to Consider During A/B Testing:

Advantages and Disadvantages of A/B Testing:

A/B testing is a valuable asset for testers as it allows them to tackle various design and product specific issues, while providing thorough comparisons of two variations of the same product. However, no process is perfect and likewise there are some disadvantages of this testing testing also. Hence, mentioned below are some of these advantages and disadvantages:

There are a number of tools available in the market for A/B testing. Here's a brief description of some of them:

With the kind of importance social media and the internet has achieved for business organisations, A/B testing is a highly beneficial tool to get an accurate assessment of the strengths and weaknesses inherent in the product. When used with other methods of testing, A/B testing becomes a valuable tool that helps refine the working design of the product and for attracting more users.

To get more insight on ab testing read our next article that focuses on landing page and ab testing checklist.