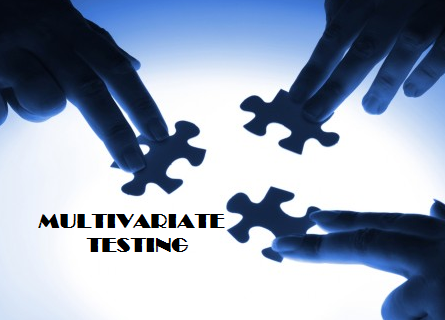 In this ever progressing world, change has become a necessary mode of survival for organizations, big and small. Updating and upgrading your website or software products with different configurational changes, layouts, settings, privacy policy, and more has an effective move in the direction of improving its quality, SEO ranking, and subsequently increasing the users engagement. But, whether these changes work or not? Our article-multivariate testing is all about that.

What is Multivariate testing?

An important software testing technique, Multivariate testing (MVT) has garnered great significance among organizations around the world. It is a method in which different elements of a web page are tested individually, to incrementally improve the conversion rates and to get meaningful results.

The idea during this method of testing is to create different combinations of the elements of the target or landing page and observe which combination works the best and helps the organization reach their conversion goal.

It is simply a hypothetical process of analyzing the various combinations of elements and selecting best of them to optimize different pages, websites and apps.

We have a website with three elements; an image, a text box and a submit button. For each of the given element, we may have two different variations (colour, size, shape, text, image, etc.) as stated below:

Now, the possible combination resulting from each different variation in the element would be:

Thus, possible number of combinations comes out to be 9.

What's the need of Multivariate Testing?

A web page is composed of various set of elements, such as buttons, header section, sidebar etc. For example, an e-commerce website will have menu options, which will enable a user to make their own choice and order the item they selected. These different versions might be like this:

A user selects his choice of menu and clicks ORDER NOW

User makes his choice, a pop up is shown with his name and BUY NOW button.

There could be various versions of a single task or activity. Each set is tested to see how much traffic each version attracts. Based on the highest rate of traffic generated for a website, that particular version is chosen as a final option. 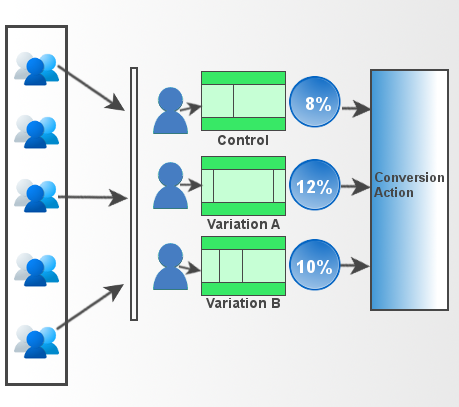 By running a multivariate test, an organization can create a website or web page with most engaging and influencing elements, which will help them generate statistically significant traffic. Therefore, to get best results, it is crucial to run successful multivariate test, which can be done with the assistance of the following process:

How to Calculate the Number of Combinations required for Multivariate Testing?

No. of possible combinations to perform multivariate testing is calculated based on the number of variations in the elements of a particular section on a website. Mathematical formula for the same is

Apart from offering various advantages to the team of testers, as well as the organization, multivariate testing also offers few disadvantages, which are stated below:

What to Choose: A/B Testing or Multivariate Testing?

As stated above, A/B testing is used to compare between two different versions of the website on various parameters, whereas multivariate testing is more refined level of A/B testing with the testing of each different sections and their elements in all different possible combinations in the same website version.

Therefore, if your site has less visitors or traffic then you the A/B testing approach, otherwise multivariate testing is a better option for a website with relatively large number of visitors.

In the end, we can conclude that though time consuming, multivariate testing is an effective and efficient way of testing various aspects of a website, web pages and its numerous elements, to improve conversion rates and to generate better results. By driving traffic to these components, it helps track the user engagement with a particular element, which further helps create an optimized website/web page.