It is the concept of applying testing practices consistently throughout the software development life cycle model. This method of testing ensures detection of bugs at the right time which further ensures avoidance of any kind of risk in terms of time and cost.

The development testing may consist of few metrics for analysis. Here is a list of a few of them:

The above mentioned points are the measuring criteria for keeping a track of the progress of a software project. 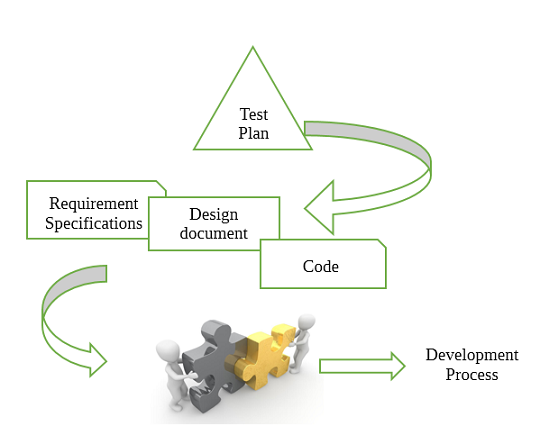 The idea behind development testing is keeping the specification documents baselined so that as the test plans are executed, one can analyse whether the development process has followed the guidelines/specifications throughout the process of creating the edifice. Thus 'Development Testing' aims to establish a framework to verify whether the requirements of a given project is met in accordance with the rules of the mission to be accomplished.

This type of testing is done when any new change occurs in part of the existing code. It is to ensure that the current software works fine and have no additional side effects to it, after necessary modifications are made to the software system. It is another way of saying that the process of verification is carried out to ensure robustness of the software system.

When to perform Regression Testing :

Regression Testing can be carried out at any phase - unit,integration or system. Mostly, regression testing is done at the system level.

Regression test is a methodology to facilitate improvement and advancements in an already existing software application. The life cycle of an application goes through a lot of changes as a result of competitive requirements, arrival of new technologies, requirement changes by the customer, increasing demand for a certain type of feature as per market demands and so on. Therefore regression test is a common phenomenon in the 'Software Development Life Cycle', contributing towards an efficient application delivery and a better life for the product in question.