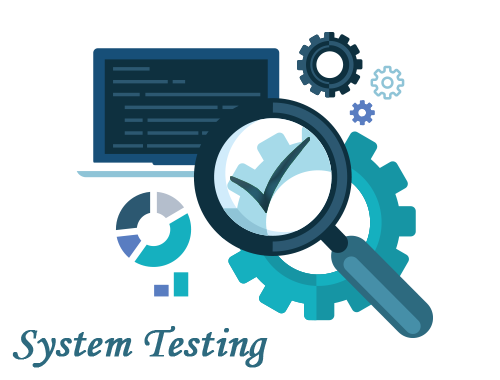 What is System Testing?

System testing is a method of monitoring and assessing the behaviour of the complete and fully-integrated software product or system, on the basis of pre-decided specifications and functional requirements. It is a solution to the question "whether the complete system functions in accordance to its pre-defined requirements?"

It's comes under black box testing i.e. only external working features of the software are evaluated during this testing. It does not requires any internal knowledge of the coding, programming, design, etc., and is completely based on users-perspective.

A black box testing type, system testing is the first testing technique that carries out the task of testing a software product as a whole. This System testing tests the integrated system and validates whether it meets the specified requirements of the client. Other characteristics of system testing are:

When to Perform System Testing?

As stated earlier, software testing life cycle consists of various levels of testing, which makes it crucial for us to understand when, in STLC, is system testing is executed by the testers. To help you with this, here are the scenarios when a tester can perform system testing, either manually or with the assistance of testing tools.

Some of the aspects, on which system testing focuses are

Before initiating the process of system testing it is vital for the team to consider all the requirements, which can impact the result of testing or make it more tedious. Therefore, mentioned below are some important prerequisites of system testing, for your reference.

Since the importance of system testing is immense in STLC, it is important that we define its process, to ensure that its procedure is executed accurately without missing any critical detail or step. Process of system testing can vary from project to project or organization, however, there are six common steps that are part of its process and which are defined below:

System testing is performed by professional or individual testers for various reasons. From evaluating the system to ensuring its compliance with the specified requirements, this type of testing offers great aid to the testing team as well as the other stakeholders of the project. Few of the other reasons for performing this testing are:

Though performed after system testing, people usually assume acceptance testing to be a part of system testing. Therefore, to differentiate them from one another, here is a comparison between the two:

Find more differences between these two levels of testing here.

An integral part of software testing life cycle, system testing is performed once the process of software development is completed and the product has gone through unit and integration testing. This testing is not limited to one aspect or component of the product but is used to test the software system as a whole, which makes it an important part of any successful testing cycle and hence should be implemented by testers who want to deliver superior user experience.

To find the differences between System Testing vs Integration Testing, click here.