What is Negative Testing? 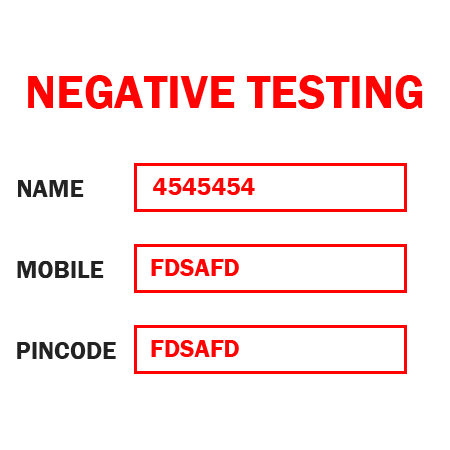 Software development is by no means a child's play. It is all about writing long and intricate codes and then testing these complex codes to guarantee flawless and uninterrupted performance. Testing is a major feature of writing successful codes. Any cost-cutting in the testing phase will lead to a malfunctioning software which is the surest way to disaster. In this article, we shall discuss a unique testing technique known as Negative Testing.

Negative Testing is a technique wherein the response of the software is evaluated when unexpected parameters are entered. In simpler terms, during Negative Testing, the performance of the application is tested using invalid data inputs. For example, numbers are entered in alpha-numeric fields and vice-versa. Similarly, skipping mandatory fields can also be a part of this test. In an ideal scenario, during such times, the application should show the error "Invalid data input".

Here, we are providing, some of the key features of the negative testing, which may be seen, as under:

Why is a Negative Testing Important?

Quite often Negative Testing is also known as Error Path Testing or Failure Testing. The aim of this type of testing is to ensure suitable and optimum software performance even when the user behaves irrationally by entering invalid and inappropriate data. The idea is to help the user correct his or her error while entering incorrect data and guiding them to identify and rectify the said mistake. This makes for a stronger and more user-friendly application. As such, every software development firm that wishes to have a strong and competent software needs to undertake rigorous Negative Testing as well.

What is Negative Test Case?

Negative test cases are another important component of negative testing, which are designed by the team to test the software product in ways in which it is not intended to be used. As this is done to ensure the stability and reliability of the software, these should be considered by the team in their testing efforts:

Negative testing improves the test coverage of a software application while detecting the possible application crashes in different situations. Some of these test scenarios and situation are:

It is quite an obvious fact that Negative Testing is beneficial for the final product launch. Although the basic purpose of negative testing, is to make a software, function undesirably and differently from its expected working, on feeding with the invalid inputs, with the intention of break into the system, but what may be other benefits, may be assimilated from the points mentioned below:

Though negative testing is beneficial for a software product and is part of every successful software development cycle, there are still some disadvantages of this software testing technique, such as:

What is the Difference Between Positive and Negative Testing?

You can find several other differences between these two testing techniques in our article Positive Testing vs Negative Testing.

Many a time people live under the misconception that Negative Testing is one more way of increasing expenses without any conceivable benefits. This ideology is fatal as it can compromise the quality of the final product. So, if you want to aim high, then it is best to never underestimate the power of any testing technique. In short, by enforcing Negative Testing you can improve the quality of the software and make it stronger.