In Software development, testers and developers combine their expert knowledge and efforts to create an application or product that can be easily implemented and updated. Before the release, these products go through various testing processes, which guarantees that the application is working in an intended manner and is providing expected results. Moreover, the team of testers uses various levels of testing to identify missing areas and to prevent overlapping and repetition between the software development life cycle phases.

It is only after going through all these stages and continuous checking and rechecking, that the product is released for the use of the client or the end user. Therefore, to get a better understanding of various software testing levels, here is a detailed analysis of each level of software testing.

Lets go through these categories of software testing.

Testers and developers use their expert knowledge to test and develop the software and make it error free before its release. The various techniques adopted by testers to validate the functionality, quality and other properties of an application are: 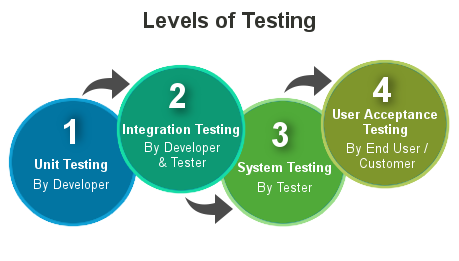 Software development Life Cycle is a time consuming process that involves various methodologies and techniques. Testers and developers use their experience and knowledge to create products that are of exceptional quality and are designed as per the requirement of the clients. However, the most integral part of the software development process is testing, which is executed in the software through several levels.

In these levels, the individual units are tested, integrated and checked for interfaces established between them. After this, the entire software is tested to ensure that the output produced is according to user requirements. It is only after successfully accomplishing these levels that a software application is termed suitable for release.